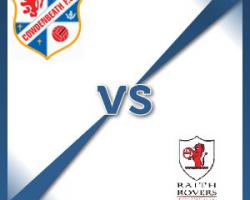 Cowdenbeath V Raith - view commentary, squad, and statistics of the game live.No ban for O'BrienCowdenbeath will have Thomas O'Brien available for the visit of Fife neighbours Raith.O'Brien was sent off against Dumbarton and facing a suspension but the club have appealed against the decision and their case id due to be heard next week, making him eligible to play on Saturday.An ankle injury has ruled Calum Gallagher out of what would have been the last game of his loan spell

The Rangers striker joins John Armstrong (ankle), Dean Brett (foot), Kenny Adamson (foot) and Sammy Stewart (groin) on the sidelines.Ahead of the game, Blue Brazil boss Jimmy Nicholl said: "We lost 3-1 to Dumbarton but there were parts of the performance that were really good

If we can play well for the 90 minutes we can win this game."Raith are able to include Barrie Mackay after an agreement was reached with Rangers to extend his loan deal.However, Kevin Moon is an injury doubt and goalkeeper Kevin Cuthbert continues to miss out after shoulder surgery.Rovers manager Grant Murray is looking for his men to build on last weekend's 1-0 win at Falkirk.He said: "Putting in a strong and gritty performance to win last weekend was a good way to end 2014

Doing the same at Cowdenbeath would be a terrific start to 2015."If we can put together a strong run then we can look to climb the table and have a very positive second half to the season."