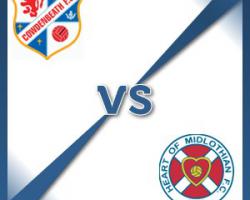 Cowdenbeath V Hearts - view commentary, squad, and statistics of the game live.Gallagher boost for Blue BrazilCowdenbeath will have Calum Gallagher back in their ranks for the visit of Scottish Championship leaders Hearts.The Rangers striker has missed the last two matches, under the terms of his loan deal from the Ibrox club.The Blue Brazil are again without the injured John Armstrong (achilles), Kenny Adamson (foot), Dean Brett (foot) and Craig Sutherland (knee) but manager Jimmy Nicholl is promising to attack the Edinburgh giants on Saturday.He said: "We kept things tight against Rangers last week and almost saw things out before we lost a goal that we could not get back

This game is different as we are at home and will look to take the game to a very good Hearts side."Hearts expect striker Dale Carrick and midfielders Sam Nicholson and Jason Holt to return.But striker Osman Sow and left-back Kevin McHattie remain out until the new year.Head coach Robbie Neilson said ahead of the Central Park clash: "It's a difficult environment to go into

It's a tight pitch and it's an open stadium but at the end of the day it's green and it's got white lines on it, so we just need to go and play."We'll try to play football but at times it could be difficult, so we need to make sure we have another option that we can look at if we need to change the style of play."